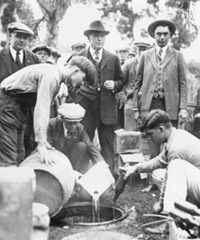 The Eighteenth Amendment banned the consumption and distribution of all alcoholic beverages from 1920 - 1933.

Clip#:
Audio:
Location:
428557_1_1
Yes
Washington D.C. , USA
Year Shot:
Video:
Timecode:
1937  (Estimated Year)
B/W
00:05:05 - 00:05:45
Tape Master:
Original Film:
HD:
1699
035-049-03
N/A
Prohibition Supporters Prohibition had been repealed, but the WCTU (Women s Christian Temperance Union) was a very vocal minority when they convened in Washington. Older women speaking to camera, states " I solemnly promise, God helping me, to abstain from the use of all distilled, fermented and malt liquors. And that means wine and beer. I don't drink, and I will do all I can to keep you from drinking." Very matronly looking women.
Download Expand Minimize Reel (1)
Notes:

Clip#:
Audio:
Location:
342969_1_1
Yes
NEW YORK, N.Y.
Year Shot:
Video:
Timecode:
1933  (Actual Year)
B/W
00:30:41 - 00:31:43
Tape Master:
Original Film:
HD:
1508
005-197-06
N/A
Rolling, jumpy dull contrast in imagery The happy warrior expresses his pleasure at the repeal of the eighteenth amendment as huge shipments of gin are made with the approval of the federal governmental for the first time in thirteen years. ("Of course I am delighted but not surprised by the primary appeal of the 18th amendment. I felt all along, that when this matter was properly submitted to the rank and file of our people, that they would readily see that it had no place in our constitution. It would be very difficult if not impossible to estimate the benefits that would come to this country from the lesson taught to the coming generation to make it their business to see that no such matter ever again is made the subject of federal constitutional law.") At the dock you see the first shipment of Liquor loaded on to a cargo ship as young ladies are sitting on the cases of liquor waving some kind of legal documents in their hands gleefully waving them.
Download Expand Minimize Reel (1)
Notes:

Clip#:
Audio:
Location:
343027_1_1
Yes
OFF LONG ISLAND, N.Y.
Year Shot:
Video:
Timecode:
1933  (Actual Year)
B/W
00:28:58 - 00:30:35
Tape Master:
Original Film:
HD:
1509
005-203-05
N/A
Rolling contrast dull and light in imagery Spectacular and exclusive pictures of a battle between the law and liquor smugglers, who attempt to land their shipments before repeal of the eighteenth amendment, obtained by universal cameramen scouting the sea from the air and in high-powered boats. A graphic picture story of the last episode in the life of the 'noble experiment.'
Download Expand Minimize Reel (1)
Notes:

Clip#:
Audio:
Location:
312663_1_1
No
United States
Year Shot:
Video:
Timecode:
1920  (Estimated Year)
B/W
06:52:37 - 06:53:11
Tape Master:
Original Film:
HD:
6
N/A
B/W footage of Prohibition that seems to come from various sources. Some look like they could be newreel/documentary others are clearly staged. Loading of trucks by night; trucks on road at night; truck smashes into car (this looks like it came from a fiction film--continuity editing & good lighting, etc.); truck stopped by men with guns (FBI? Other gangsters?); great shot of row of milk cans shot up by machine gun fire.
Download Expand Minimize Reel (1)
Notes:

Clip#:
Audio:
Location:
459685_1_9
Yes
Various
Year Shot:
Video:
Timecode:
1918  (Estimated Year)
B/W
00:17:34 - 00:18:06
Tape Master:
Original Film:
HD:
926
WPA 1593
N/A
Motion film of Clarence Darrow speaking against prohibition movement: "The last election in this country has demonstrated that the people of this nation do not believe in prohibition. No one can be temperate if he is told what to do. He must govern his own life and his own attititude. People are learning that individual liberty is the first concern of every citizen. Without it, life is not worth living."
Download Expand Minimize Reel (21)
Notes:
Narration & Still Photos are not available for licensing.

All the Chief Executives Since the Screen was Born. United States Presidents ...

Clip#:
Audio:
Location:
540757_1_17
Yes
USA
Year Shot:
Video:
Timecode:
1929  (Estimated Year)
B/W
04:42:49 - 04:43:24
Tape Master:
Original Film:
HD:
238
N/A
NYC Mayor Fiorello LaGuardia delivers fiery anti-Prohibition speech to camera: " for a howdown on Prohibition. 145 members of the House of Representatives, representing over 14 million people, have petitioned Congress to re-submit the question of Prohibition to the American people. After 11 years of dismal failure of the so-called nobel experiment, we maintain that the American people have a right to decide finally on the question."
Download Expand Minimize Reel (19)
Notes:

Request a digital copy of this clip to screen.
Close Request Screener