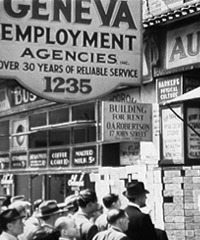 The Stock Market Crash of 1929 and the conditions that followed

Coal Mining on a Budget aka "Steal This Coal Mine"

The Rise and Fall of The Third Reich. Part I - The Rise of Hitler.

Clip#:
Audio:
Location:
534555_1_11
Yes
United States
Year Shot:
Video:
Timecode:
1933  (Estimated Year)
B/W
01:14:33 - 01:14:47
Tape Master:
Original Film:
HD:
1483
WPA 382
N/A
National Recovery Act: MS NRA signs being positioned (or already in place) in store windows of a Jewish delicatessen, a restaurant, a barber shop, a clothing store, and a branch of the Pennsylvania Exchange Bank. Woman says, "I got a position at this bank after being out of work for two years and am I happy."
Download Expand Minimize Reel (18)
Notes:
Narration is not available for licensing.

Various Depression Scenes - Segment from Focus on the 30s

Clip#:
Audio:
Location:
311192_1_1
No
United States
Year Shot:
Video:
Timecode:
1930  (Estimated Year)
B/W
02:19:01 - 02:19:41
Tape Master:
Original Film:
HD:
1
TQ003
N/A
See catalog #492872 for entire film. Master 1 - Tape 2 Some 1930s depression scenes: People at a neighborhood grocery store/shop. A man (grocer/butcher) in a white apron hands a package to a woman. Sign: "Never Mind the Holiday. We Will Trust You". The man looks very satisfied with himself, happy, charitable. Cut to another sign: "You don't need money/WHAT HAVE YOU GOT?/We Will Take Anything." Man walks up to a butcher with a guitar case, presumably to barter it for food. Grocer inspects guitar. At 02:19:09: more shots: a street riot, violence, police try to control mob scene. A bread line on the sidewalk of an urban street. CUs of people in breadlines, both white and black. Old man with rumpled hat/clothes. The poor look directly into the camera, pathetic, beaten. FDR gives a private talk, probably a fireside chat. A house falls into a river (disaster, flood, collapse). Very striking angles on the poor, homeless: standing in lines, etc. Series of shots of work, 1930s/Great Depression. Work camps for the WPA (Works Projects Administration), could be prison camps. Lots of emphasis on african-american workers. Construction job, with tractors; possibly homes. Cut to construction in urban areas. Men in overalls pull planks of wood, saw on sawhorses. Women (again, African-Americans) file away 3 x 5 index cards. Secretarial, clerical, office. Line of women workers. Men and women sitting at desks, writing. A woman at a laundry hands some clothing to her boss. People at work, earning a living. Recovery from the depression.
Download Expand Minimize Reel (1)
Notes:

The Twentieth Century - The Creative Thirties Retrospective film on American ...

The Twentieth Century - The Creative Thirties Retrospective film on American ...

Clip#:
Audio:
Location:
541489_1_4
Yes
Various
Year Shot:
Video:
Timecode:
1933  (Actual Year)
B/W
00:15:19 - 00:15:51
Tape Master:
Original Film:
HD:
308
WPA 1600 A
N/A
March 12, 1933 Franklin D Roosevelt delivering first Fireside Chat regarding the Bank Holiday. "The bank holiday, while resulting in many cases in great inconvenience, is affording us the opportunity to supply the currency necessary to meet the situation. No sound bank is a dollar worse off than it was when it closed its door I can assure you that it is safer to keep your money in a reopened bank than to keep it under the mattress.
Download Expand Minimize Reel (9)
Notes:
Narration is not available for licensing.

Request a digital copy of this clip to screen.
Close Request Screener